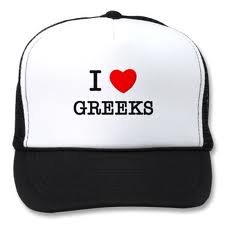 I am sure you are riveted, just as I am, to the latest in the unfolding European Debt Crisis. Greece is in trouble. Greeks don’t want austerity, but they want a return to the Drachma even less. Germans aren’t keen on funding the Greeks’ early retirement, however. And the economy is foundering.

I think it’s time to think on a micro level–where everyone does his part to help out someone in need. Think of it as a Spaghetti Dinner fundraiser, except in this case it’s gyros. In order to help their economy, we need to boost exports. Let’s think of where the Greeks have a competitive advantage.

1. Ouzo. No that won’t work. It’s nasty. In fact, the Turks had to rename it, it was so awful. I suppose we could pay a small fee to ask them to stop making it. While we are on the subject of the Turks, I’m sure they would pay a hefty sum for the promise to leave Cyprus alone.

3. Islands, lots of them. Maybe each German citizen could get a timeshare in sunny Naxos in exchange for a bail-out.

4. Yogurt. Greek yogurt is delicious. I say we hand over the patent to whatever straining technology there is, and all Greek yogurt is now made in and exported from Greece.

5. Democracy. If every democratic nation could pitch in, say, 10 million dollars for the use of the system of government the Greeks invented, that would go a long way. Maybe there could be a sliding scale for how long you’ve been using it. America’s bill would be relatively cheap.

6. National treasures. Maybe instead of demanding London return pilfered antiquities, the Greeks could broker a deal to lease them. Admittedly they aren’t in much of a bargaining position here.

7. Grease. All royalties and rights to the movie and musical franchise. Just thinking out of the box here. Remember, shared sacrifice. I’m sure Stockard Channing would go for it.

8. Marathons. Judging by the number of 26.2 bumper stickers in my zip code alone, imagine what you could collect with a toll booth at every mile.

9. I remember from my honeymoon in Greece, that they have an abundance of cats. The market for cute cat YouTube videos has got to be able to be monetized somehow. Zuckerberg, get on that would you?

Hmmm. Other things Greece is famous for…

Celebrity cruise with Zach Galifianakis and Constantin Maroulis aboard a Greek cargo ship with captain Nia Vardalos and all the feta, baklava, and dolmades you can eat. Who’s in?