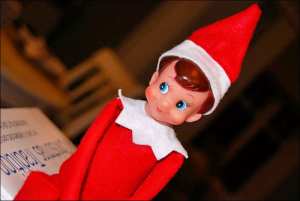 I don’t appreciate being compelled to do anything or feel a certain way. My mom said as much in the single entry that’s in my baby book. (I’ve got 2nd child issues too, but that’s a blog for another day). I don’t do Valentine’s Day, don’t like Disney, and refuse to forward the chain letter no matter how many millions it will cost me and what terrible skin condition threatens to befall me if I don’t.

So, the Milhizer house is Elf-on-the-Shelf-free. I don’t know when this became a tradition. I really don’t think it is. I do think it’s a marketing ploy. And I’m all for marketing ploys. They keep Eric employed.

I had never heard of this “tradition” until recently when it became an apparent requirement to keeping your kids out of therapy. I really don’t see the purpose. (I won’t be goaded into looking it up because that would just play into the marketing-types’ dastardly plan). But from what I can glean, he appears every night to exact some sort of mischief in the house. It’s not clear when/why his brand of domestic terrorism abates. Really don’t care.

Now before you start throwing around the S-word, I love Christmas. I’m as jolly as you’ll ever find me. If you ride in my car between Thanksgiving and Christmas, you will be subject to the Burl Ives sing-a-long. You will trim the tree with a light and joyful heart alongside admiring woodland creatures. You will snuggle up with cocoa next to a roaring fire until you qualify as jerky. So that’s not it. I also say, if you want to put a glass pickle on your tree, have at it. That’s a harmless kind of crazy.

Here’s where I take issue with the Elf

1. Why would I purposely create a mess in my house? I’ve got 4 males that do that year ’round and accordingly,

2. How would my kids be able to distinguish the elf-made mess from the general chaos? I’d have to follow them around. “No, look harder. That’s your pile of crap, not my carefully staged one.”

3. It’s not like I’m starved for activity this time of year. It’s a Christmas miracle when the right kid shows up at the appropriate piano recital with the right music in hand.

4. That Elf is creepy in a Howdy-Doody/serial-killer-way. I’m pretty sure you’ll find Barbie’s missing arms if you really search that box. And you blamed the dog. That’s just what he wanted. I’d sleep with one eye open, if I were you.

1 thought on “sELFless in Texas”